Steve Mckay has always loved Halloween, so when he moved to Taiwan 10 years ago, he decided to continue celebrating the holiday the best way he knew how — by making silly costumes.

“I loved Halloween growing up, doing DIY projects with my mom and dad,” Steve told The Dodo. “As a foreigner living overseas, it’s sort of a funny tradition I can show people about [what it was like] growing up back home.”

Steve started by creating elaborate Halloween costumes that he could wear to the school where he works as a teacher.

But when he adopted a stray dog named Buster, it seemed only natural to include him in the holiday tradition.

“About five years ago, we found Buster wandering around on the street,” Steve said. “He was kind of ugly and had some skin problems but also very cute and loved people. He followed us home, and after a few days, we decided to keep him.” 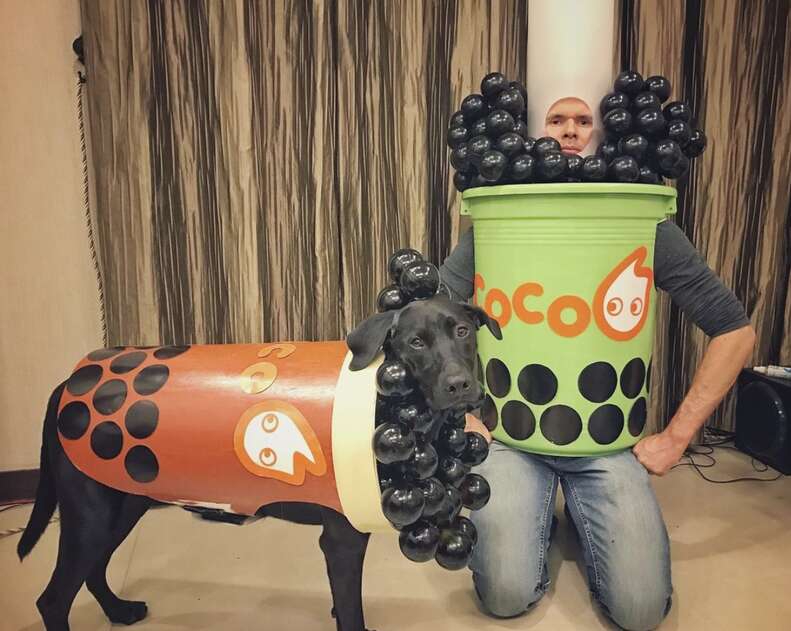 “I always made silly Halloween costumes, and my wife thought I was nuts,” he added. “One year, I made one for Buster also. It was pretty funny, and lots of people liked it. After that, I started making one each year.”

When Steve adopted another stray named Beans, she followed in the family’s Halloween footsteps.

Steve makes most of his costumes using felt, cardboard and glue. Anything he can dream up becomes a costume.

Luckily, Buster is a very good sport when it comes to modeling his dad’s elaborate creations.

“Buster doesn’t mind anything,” Steve said. “Sometimes he looks serious in the photos, but that’s only because he is looking at a dog treat. When I made Buster into a dragon boat, he was just like, ‘Guess I’m a boat now … toot, toot.’ And he went cruising around looking for treats.”

Buster’s love of food often inspires the costumes that his dad makes.

Beans, on the other hand, is not the biggest fan of dressing up. “Beans is more difficult,” Steve said. “She doesn’t like anything too big, but she is fine with hats, wigs, goggles and clothing.”

When Buster and Beans aren’t busy dressing up with their dad, they love to run around, go swimming and wrestle with each other. The two former strays couldn’t have a better life — well, as long as it’s not October.