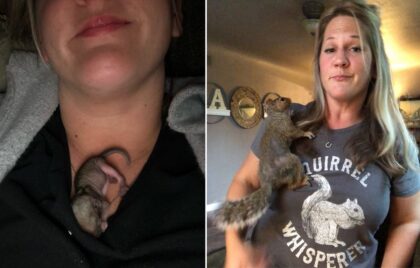 Jessica Adams was taking her son to preschool back in 2019 when she noticed a tiny pink blob on the sidewalk. Upon closer look, she realized it was a baby animal that was barely alive. It turned out to be a poor tiny baby squirrel!

Jessica recalled, “He was alone and practically frozen, hairless, eyes still closed, and, unfortunately, without his mother around.”

He weighed only 1.3 ounces and half of his tail was missing, which suggests that he was “pulled out of his nest by a predator.”

Jessica tried her best to keep the baby squirrel alive by keeping him warm and nursing him through a pipette.

They named him Steven Jeffrey Adams, or Steve for short. Using a mail scale, Jessica kept track of his growth to check if he was eating enough.

To keep up with the round-the-clock care, Jessica even took the little one to work every day!

Steve’s personality slowly shone through as he grew bigger. Jessica shared that he was a mama’s boy who only “tolerated” her human kids and did not want anything to do with her husband.

“He needed me, he would have died without help. Little did I know how much I needed him too or how much I would adore him,” she shared.

Steve grew up to be a smart squirrel who knew to come whenever his human mom called him. Eventually, Jessica knew it was nearly time for Steve to go back to nature, where he belongs. So, to help him adjust to the outdoors, her family built him a two-story house for him in their backyard.

When it was time for Steve to leave the nest, Jessica couldn’t stop the tears.

But to her surprise and delight, Steve still visits her regularly to this day!

Jessica has no regrets about becoming a “crazy squirrel mama.”

She said, “Every creature deserves a chance to live, great or small. If I would have left him to die I would have missed out on a great adventure and experience.”

Steve has grown up to be a really good boy! It’s so sweet that he still comes home regularly to his human mom. It seems that he would never forget how his life was saved by a caring stranger.